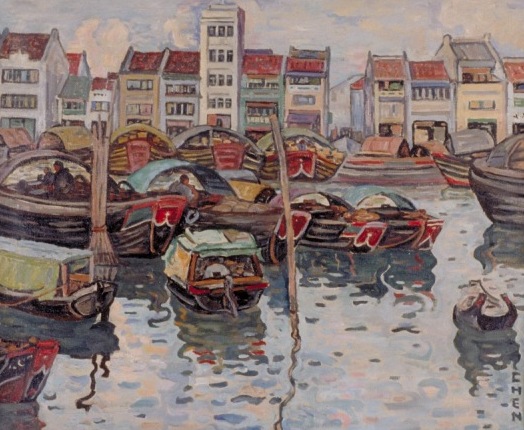 Originally used by the Chinese as a trading denomination for the Southeast Asian region, “Nanyang” literally translates as “South Seas.”1 Terms such as “Nanyang style” and “Nanyang art” are often used in Singapore’s art historical discourse, and one of the first attempts to define these terms was made by art historians Redza Piyadasa and T.K Sabapathy in 1979, as part of a seminal exhibition of Nanyang artists’ works.

Piyadasa characterises the development of Nanyang art as an extension of developments in China, which includes a change of attitude towards Western-style art and aesthetics. He suggests that the significance of the first-generation Nanyang artists “lies in the fact that they were responsible for bringing to British Malaya a sophistication and a cosmopolitanism that had hitherto been absent within the local art scene.” 2

Many Nanyang artists were Chinese who left China during the civil war. Sabapathy observes that with their training in both Western and Chinese art, these artists often adopted an experimental approach by “using styles and techniques derived from two sources: Chinese pictorial traditions, and the School of Paris.”3 This synthesis of artistic techniques was not bound by mediums and Nanyang artists produced both ink and oil works.4

Nanyang artists also strove to portray the local environment and people in their art. Rather than a specific geographical location, they approached the idea of the “local” as a fluid conception,5 looking “at their surroundings with a view towards producing motifs in order to fulfil pictorial needs.”6 This interest extends beyond Singapore and Malaya to other parts of Southeast Asia, evidenced by the landmark 1952 Bali trip undertaken by Liu Kang, Chen Chong Swee, Chen Wen Hsi, and Cheong Soo Pieng.

Many Nanyang artists were students or teachers at the Nanyang Academy of Fine Arts (NAFA) but not all Nanyang artists were formally associated with NAFA, as some of them undertook private studies with the NAFA teachers.7 In addition to the four artists mentioned above, artists such as Lim Hak Tai, who was the founding principal of NAFA, and Georgette Chen have also been included among the first generation of Nanyang artists.

Piyadasa identifies 1938 to 1965 as the golden period of the Nanyang art movement,8 while Ong points out that the Nanyang art reached its maturity in the 1950s to 1960s.9 Even though its prominence was gradually overshadowed by other artistic concerns such as Social Realism in later years, the Nanyang style remains an important chapter in any study of Singapore’s art history.

Like Gauguin, they searched the Southern Seas to find a new art. (1982, January 1). Straits Times Annual.

This guide provides a selection of resources on Nanyang artists and the Nanyang art movement and is not meant to be exhaustive. You can also visit catalogue.nlb.gov.sg to search for more materials on specific artists. This resource guide was prepared in November 2021 by Luke Chua, Senior Librarian at the National Library. The information in this resource guide is valid as at November 2021 and correct as far as we are able to ascertain from our sources.